If These Walls Could Talk: MREB Set for Demolition

The Medical Research & Education Building (MREB) is a relatively small facility tucked next to the Wintrobe Research Building and Building 521. If someone unfamiliar with campus walked past it, they might not even know what it is. Yet, as one of the oldest buildings on campus, MREB is an important historical landmark for University of Utah Health.

As we draw closer to the construction of a new School of Medicine building, MREB is due to be demolished. Before we get there, let’s take a look back at the history of this small, but pivotal building.

To set the stage, it’s the 1940s and the University of Utah School of Medicine was a relatively small, yet determined program trying to grow in both enrollment, funding, and reputation. The school’s programs were operated in a variety of facilities across campus and the community, and the term “facilities” should be used loosely. The program used the old Salt Lake County Hospital, which was a rundown building prone to electrical failures, as well as conducting research in converted horse stables.

Seeing the need for dedicated facilities for scientific research, university officials sought and secured funding from the National Cancer Institute and the Utah Legislature for a new basic science research building. However, J. Bracken Lee, the governor of Utah at the time, vetoed the funding and left the School of Medicine in a bit of a lurch. 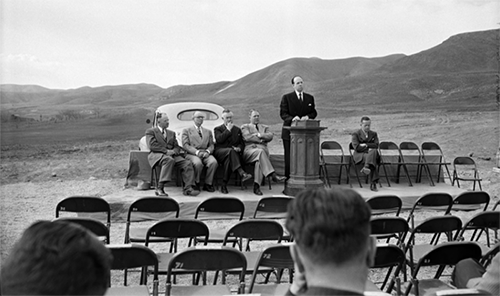 Given the funding situation, it was clear that an entire basic science building was no longer an option. So, the university set its sights on the construction of a facility focused on combating cancer with the previously obtained support from the National Cancer Institute.

The groundbreaking ceremony for the newly named Cancer Research Building (CRB) was held in February 1950 with around $400,000 dedicated to its construction. During the work, the Atomic Energy Commission approached the university and added another $100,000 to build an annex for a radiobiology laboratory. A year later, in 1951, the Cancer Research Building and annex were completed.

The work conducted in the CRB was cutting edge for its day. In addition to the cancer research, the radiobiology lab worked with the Atomic Energy Commission to monitor the radiation released during the nuclear tests in Nevada in the 1950s. Instruments were even set up on the building’s roof to measure atmospheric radiation from the blasts. 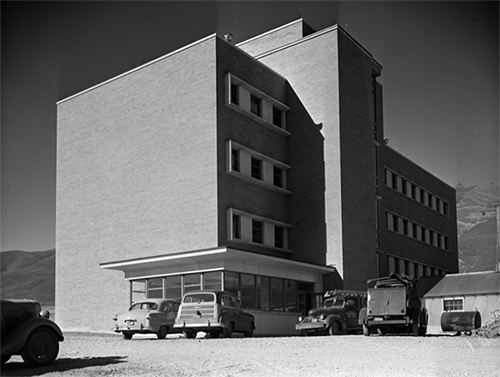 The CRB was vital in helping the School of Medicine maintain its reputation as a medical program worthy of funding and staffing in the space of time until the construction of Building 521 in 1965 cemented the program’s status.

The Cancer Research Building, eventually renamed the Medical Research & Education Building, has served University of Utah Health well over the years, but the time has come to turn the page on the ageing structure. Abatement on the 70-year-old building is scheduled to begin in November 2021, with the demolition kicking off in early 2022.